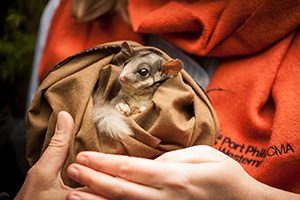 Recovery effort for the critically endangered Helmeted Honeyeater and lowland Leadbeater’s Possum have ramped up in recent years with funding from the Australian Government’s National Landcare Program for the ‘Protecting and Connecting EBPC Listed Species and Communities in the Yarra Ranges’ project.

This project has focused on improving the quality and extent of habitat for these two species. The Helmeted Honeyeater is Victoria’s bird emblem but is critically endangered with less than 200 birds found in the wild, all confined to the 600 hectare Yellingbo Nature Conservation Reserve. The Leadbeater’s Possum is another of Victoria’s faunal emblems, with the majority of the population residing in the Victorian High Country. A unique lowland subspecies of the Leadbeater’s Possum is also only found in the Yellingbo Nature Conservation Reserve. Latest population surveys of this lowland subspecies have found that the population has dropped to just 34 individuals.

The ‘Protecting and Connecting EBPC Listed Species and Communities in the Yarra Ranges’ project used the latest scientific modelling to focus works in the highest priority locations. The project undertook a number activities to achieve improvements in habitat quality and extent with the specific focus on the habitat requirements of Helmeted Honeyeater and lowland Leadbeater’s Possum. Activities included a targeted incentives program for landholders in high propriety locations, the purchase and restoration of a highly significant parcel of land adjacent to known breeding sites, a large scale project on the Indigenous owned property known as Coranderrk and a deer monitoring and control program within Yellingbo Nature Conservation Reserve.

The project had it’s final year in 2017-18 and has improved the quality and extent of habitat across a total of 680 hectares. It has supported over 30 landholders to improve their land management practice and purchased 2.3 ha of land that has been reinstated into the National Reserve System. Thanks to the efforts of this project, the Friends of the Helmeted Honeyeater and many other groups and organisation the Helmeted Honeyeater’s 2017 breeding season was the best on record.

Stage one of restoration works at Burrungma Biik have been completed. With the assistance of Trust for Nature, this 2.3 hectares parcel of land was purchased with funding from both the Victorian Government’s Threatened Species Protection Initiative and the Australian Government’s National Landcare Program and has been transferred into the National Reserve System. Restoration works included deer exclusion fencing around 3.4 hectares and weed control across the site, including the removal off willows, blackberry and prunus species and the revegetation of 2 hectares. This rehabilitation project will provide crucial feed and breeding habitat for the critically endangered Helmeted Honeyeater, Victoria’s bird emblem, and the fencing will protect everyone’s hard work from feral deer and pesky locals such as wallabies and wombats. A five year restoration plan has been developed for the site with further works funded for 2018-19.

The name Burrungma Biik was given to this piece land by the area’s Traditional Owners, the Wurundjeri people, and means “misty lands”.

Major habitat restoration works at Coranderrk Estate were completed through a grant awarded to the Wandoon Estate Aboriginal Corporation for fencing, weed control and revegetation works at the property near Healesville. This a multi-year project including the planting of 20,000 plants across 10.8 hectares, 5.3 kilometres of fencing protecting 18.2 ha as well as weed and pest animal control in high priority area of the property. These works have been specifically designed to meet the habitat requirements of Helmeted Honeyeater and Leadbeater’s possum as well as fit in with the farming objectives of the Estate.