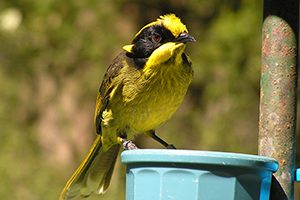 Funded by the Australian Government’s National Landcare Program, the project involves 16 organisations and skilled representatives working together to develop two habitat restoration plans. These plans provide a detailed road map for the species’ recovery so new population centres can be established outside of their home at Yellingbo Nature Conservation Reserve.

The plans outline exactly what is needed to establish two new population sites, one in the Yellingbo to Butterfield area and another around the Coranderrk area, near Healesville. The successful rollout of these plans could see both the available habitat and population of the Helmeted Honeyeater triple in 5-10 years.

The project also involves on-ground works that support the rehabilitation of current Helmeted Honeyeater population centres at Yellingbo Nature Conservation Reserve, as well as a landholder incentives program to support the establishment of new habitat locations beyond the reserve.

Over the last 12 months, the project has:

The Great HeHo Escape project builds on the long-term successes of Yarra4Life and works previously funded through the 2013-18 phase of the National Landcare Program.

The Helmeted Honeyeater and Leadbeater’s Possum are both critically endangered and identified as priority species in the National Threatened Species Strategy.

The Helmeted Honeyeater has a single wild population of less than 200 individual birds, all of which are confined to Yellingbo Nature Conservation Reserve in Victoria’s Yarra Ranges. After significant community and agency efforts to build the population from just 50 individuals in the 1990s to its current state, it is now the ideal time to capitalise on these past successes and attempt expansion.

The lowland subspecies of the Leadbeater’s Possum is also confined to this reserve, but has suffered a steep decline in the last two decades. The wild population has plummeting to just 34 individuals and captive breeding has been unsuccessful, meaning the threat of extinction looms large.