Helmeted Honeyeaters released into the wild 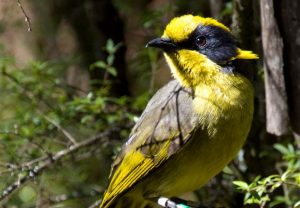 Yarra4Life was excited by Zoos Victoria’s news yesterday that four of their captive-bred Helmeted Honeyeaters were released at Yellingbo Conservation Reserve.

Victoria’s bird emblem, the Helmeted Honeyeaters were bred at Zoos Victoria’s Healesville Sanctuary  and strategically released in Yellingbo Conservation Reserve in the hope they would bolster a small, naturally-occurring group of birds.

The Department of Environment, Land, Water and Planning’s Senior Ornithologist Bruce Quin said, “After three highly successful breeding seasons, the population of Helmeted Honeyeaters numbered about 190 back in autumn and although it is the early stages of their current breeding season, the signs are very promising. At several sites Helmeted Honeyeaters that have not bred before are nesting.

“Encouragingly, some Helmeted Honeyeaters are moving out from the sites where supplementary food is provided and are foraging exclusively on natural food items, providing evidence that habitat condition in the reserve is improving. This is in part due to the numerous revegetation programs conducted by Friends of the Helmeted Honeyeater and Parks Victoria over decades”.

“This release is different from many that we have conducted previously in that the supplementary feeding will be phased out after two months, with the four captive-bred birds expected to adapt quickly to wild foods such as nectar and insects.”

One critical step in helping captive-bred birds survive when they are released into the wild is the need to teach them to recognise and then hide from natural predators. “We’ve developed a ‘stranger danger’ program for our tiny Helmeted Honeyeaters,” Healesville Sanctuary’s Director Ross Williamson said. “The program involves exposing the birds to one of our Goshawks and then following a number of steps to help them develop a flight response from birds of prey. Since the program began four years ago the results have been staggering with survival rates of the Helmeted Honeyeaters released into the wild increasing from 45 per cent to 90 per cent.”